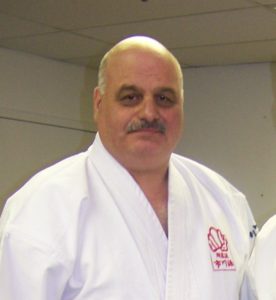 embarked upon his long journey in Karate-do on January 15th, 1960 at the age of 13 and since, has become the most senior instructor of Ichikawa-ha Goju-ryu Karate-do outside of Japan, achieving the grade of Ku-Dan (9thDan) Hanshi. This grade was awarded by Chiba Kenjiro Sensei, 5thSoke of the All-Japan Goju-ryu Karate-do Renmei in Sendai Japan, from the express recommendation of Ichikawa Sosui Sensei.  Additionally, he also holds the grade of Ju-Dan (10thDan) Hanshi awarded directly from Yamamoto Gonnohyoe Sensei, Chief Executive Master of the International Karate-do Organization (IKO) in Tokyo Japan. Taiani Sensei is recognized as one of the world’s foremost authorities on Goju-ryu bunkai and history, has won both national and international championships for kata and kumite, and is one of the only non-Japanese Kodansha to become a Jiki Deshi (direct disciple) of Ichikawa Sosui Sensei.

The year 2010 marks Taiani Sensei’s 50thanniversary of dedication and continuous training in the art of Karate-do.  Over the many years, in addition to his devotion to Ichikawa-ha, his quest for knowledge has brought him to the dojos of some of the most legendary instructors.

A lifetime of achievement in Goju-ryu Karate-do that started with one step in 1963…This was the year that Taiani Sensei began training under the authority of the East Coast division of the Goju-Kai which led to him earning Sho-Dan (1stDan).  After an unexpected announcement in 1967 that the organization was breaking away from the hombu dojo, Taiani Sensei decided to travel to California in to meet with Yamaguchi Gosei Sensei, the United States representative of the Goju-Kai, for training and to foster ties with the organization.  Shortly after, Taiani Sensei was given a personal invitation by the famous Yamaguchi Gogen Sensei to travel to Japan and become an Uchi Deshi (live-in student).  Although Yamaguchi Gogen Sensei was Taiani Sensei’s chief instructor, the teacher that truly nurtured his development during his time in Japan was Yamamoto Gonnohyoe Sensei, who was the All-Japan Karate-do Champion and a brilliant fighter who would later go on to co-found the IKO.

In 1973 Taiani Sensei returned to Japan in order to continue his training. Due to a serious family illness, Yamamoto Sensei was unable to conduct lessons and asked Ichikawa Sosui Sensei to train his student from the United States. When Ichikawa Sensei agreed and was introduced to Taiani Sensei, an immediate bond was formed and from that point on, Ichikawa Sensei would wind up being Taiani Sensei’s sole teacher from 1973 until his passing in 2005.

Along with being a masterfully incredible practitioner and teacher who was willing to share a lifetime of experience with a foreign student, one of the greatest gifts that were passed on from Ichikawa Sensei was the incorporation of two incredibly important books into training. Referred to now metaphorically as the “Old Testament” and the “New Testament” the Bubishi, which is a famous manuscript that had been passed down from master to student for generations; and the Koshudo, which is a compilation of 70 years of diligent training, research, analysis and experience by Ichikawa Sensei, are both vital throughout the progression of the system and are used as teaching and training blueprints.

One of the final messages to Taiani Sensei from his teacher Ichikawa Sosui Sensei was that it was his task to introduce Ichikawa-ha Goju-ryu Karate-do to the western world and make it grow.