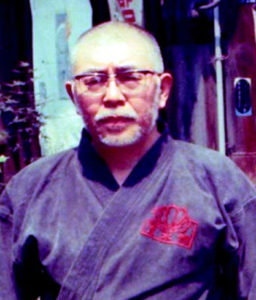 Ichikawa Sensei’s first exposure to Karate-do was when he was a student in chūgakkō (also known as Middle School in the west) and saw his school teacher, Mr. Nakasone give a demonstration of Kata and Tameshiwari(breaking).  This demonstration was something that left an everlasting impression on the young man who though to himself that one day, he would love to learn Karate-do.

After graduating from chūgakkō, Ichikawa Sensei joined the Imperial Japanese Navy and became a member of the Anti-Aircraft Artillery Unit. As time went by, Sensei received several promotions in rank and before long, had command over five men in his unit.  As fate would have it, two of the five men in Sensei’s command were from Okinawa and were also students of Karate-do.  During their tenure together out at sea, when not engaged in military duties, the Okinawan sailors and Ichikawa Sensei would train together in Karate-do.

After World War II ended, Sensei was relieved from his unit and moved back to his parent’s home in Ueno Tokyo.  Because of the devastation that Japan suffered during the war, he soon discovered, like many other men returning home, that jobs were almost nonexistent.  At this point, Sensei fell into a state of sadness.  This sadness was caused in part by his pride being damaged due to the loss of the war and because his country; his beloved Japan, was now in complete shambles and under Allied rule.  As a result, he became very withdrawn and spent all his time alone, focused on Karate training.

Behind the Ichikawa home rests an Inari shrine which has hosted many festivals.  At times, fights would break out between people who attended the festival. Whenever this happened, the neighbors in the town would rely on Ichikawa Sensei to break up these fights.  To quote one of the neighbors, “Ichikawa Sensei moves like the wind and within an instant, all the men that caused the problem were left face-down on the ground!”  This was in fact Sensei’s real training at work and the true application of his love – real Kumite.

Ichikawa Sensei had two passions that ran very deep; teaching and practicing Karate-do, and Art.  There was actually a time when Ichikawa Sensei was torn between which path he would commit himself to.  The one thing he did know for sure was that whichever path he chose, he would do his very best.  Luckily, and with much thought, Sensei chose to pursue teaching Karate-do.

With his commitment to Karate-do, Sensei was now in search of a good instructor to train with.  He visited many Dojos in his search but many local instructors refused to teach him because he had a reputation of being a fighter that preceded him.  At this time, Sensei had heard of a very good Dojo in Kawasaki that was under the instruction of Izumikawa Kanki Sensei. He then decided to take a trip to see it for himself.  When Sensei arrived at Izumikawa Sensei’s Dojo, he immediately asked to join the organization.  Before an answer could have been given, a senior student of the Dojo challenged Sensei to a fight.  To the disbelief of the student, anything he attempted to hit Sensei with; be it hand or foot technique, could not even touch Sensei because of his speed. When Sensei finally tired of playing around with the challenger, he quickly ended the match with his first technique. Soon after, Ichikawa Sensei turned to witness Izumikawa Sensei laughing.  Sensei asked of the instructor, “Why are you laughing?”  Izumikawa Sensei then responded by saying, “That student considers himself to be one of my top pupils even though he couldn’t even touch you throughout the entire match!”  With that, Izumikawa Sensei accepted Ichikawa Sensei as a student.

After some time had passed, Sensei received permission to teach Karate-do and started accepting students at home where his Dojo was located. He called the Dojo Sosui-Kan, after his first name.  Within a short period after he initially started teaching, Sensei had so many students that lessons had to actually be held in nearby park.  Many great Shihan came from this Dojo.   When Izumikawa Sensei finally passed away, Ichikawa Sensei was his top student and the inheritor of the Higa Lineage.

Taiani Choji Sensei had the honor of becoming Ichikawa Sensei’s first foreign student (Sept 1973) and remained a loyal to him until his passing.

A funny note concerning the 32 year relationship between Taiani Sensei and Ichikawa Sensei:  One of Sensei’s students ask him, “Why did you take Taiani as your first foreign student as, he is American?”   Sensei responded, “Taiani has a good heart, trains very hard and is of Italian descent, which were on our side during the war!”  Sensei’s response was met with laughter throughout the Dojo.

Additional note on Sensei: In 1999 Taiani Sensei was at a martial arts supply store in Tokyo purchasing an Obi(belt) for one of his students.  On the Obi, the Kanji read, “Ichikawa-ha”. The owner of the store asked Taiani Sensei if he was one of Ichikawa Sensei’s students and Taiani answered, “Yes.” With that, the store owner told Taiani Sensei a story about Sensei being attacked by many men at once and how Sensei was able to handle all of them until the police arrived.  The story was entertaining however, his final comment was one that will last forever…”When the time comes, and Ichikawa Sensei passes, it will be the end of true Karate-do in Japan.”

Taiani Sensei attended Sensei’s funeral and was honored to be a pallbearer and place his remains in the family urn.