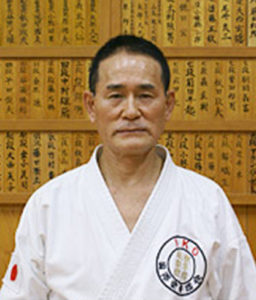 In 1952 at the age of 14 became a disciple of Master Yamaguchi Gogen at the Goju-Kai Honbu Dojo in Asakusa, Tokyo.  From this point forward, Yamamoto So-Shihan devoted his entire life to Karate-do — teaching, honing his skills and building a reputation as one of Japan’s most fearsome fighters.

While a member of the Goju-Kai and shortly after obtaining Sho-dan (1st degree black belt), Yamamoto So-Shihan was appointed instructor with the responsibility to teach the younger students.  At the age of 24, because of his immense abilities and propensity for leadership (as well as masterful kumite), Yamamoto So-Shihan became the youngest person to obtain the rank of Go-dan (5th degree black belt) from Master Yamaguchi Gogen.  Upon this promotion, Yamamoto So-Shihan was sent to the U.S. to teach alongside Master Yamaguchi’s eldest son Yamaguchi Gosei Sensei, who is the director of the Goju-Kai in America, headquartered in San Francisco.  As Yamamoto So-Shihan’s reputation grew as an exceptional fighter and teacher of Goju-ryu, It wasn’t long after his return to Japan that he was traveling the world, spreading Goju-ryu Karate-do.

In 1967, when not traveling the world, Yamamoto Gonnohyoe So-Shihan handily won the free-style kumite tournament at the first “All Japan Karate-do Championship” which was the first time that all styles of karate-do in Japan put there best up against each other for three days of brutal competition.

In 1968, Yamamoto Gonnohyoe So-Shihan broke away from the Goju-Kai and created his own organization called the “All Japan Karate-do Association” in Tokyo, Japan.  In addition to his efforts to spread Goju-ryu Karate-do in Japan, Yamamoto So Shihan has also tirelessly worked to propagate Goju-ryu Karate-do throughout the world and thus created the International Karate-do Organization (IKO) with senior instructors and students worldwide in such places as the U.S., Australia, Italy, Portugal, Taiwan, Singapore, Iran, and a multitude of other countries.

On April 19th, 2003, Yamamoto Gonnohyoe So Shihan opened the Kanda Renseikan School in Tokyo and designated it the Honbu Dojo of the International Karate-do Organization where the entire curriculum is under his direction.